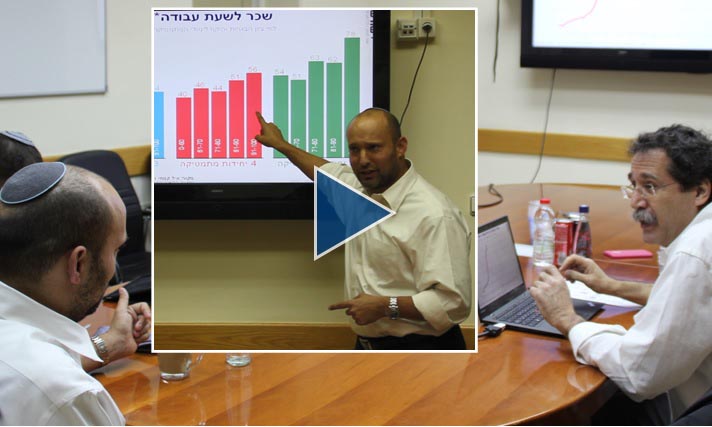 In 2015, Shoresh Institution researchers, Prof. Dan Ben-David, Prof. Ayal Kimhi and Dr. Noam Gruber, met with Education Minister Naftali Bennett and presented him with an overview of Israel’s education system and its socioeconomic impact. During the meeting, Bennett decided to personally present – to parents, teachers and principals – some of the Shoresh findings highlighting the strong relationship between the level of high school mathematics and the future wages. The video was then widely circulated on social media by Bennett and the Ministry of Education as part of their successful campaign encouraging more pupils to study mathematics at their highest level of aptitude. 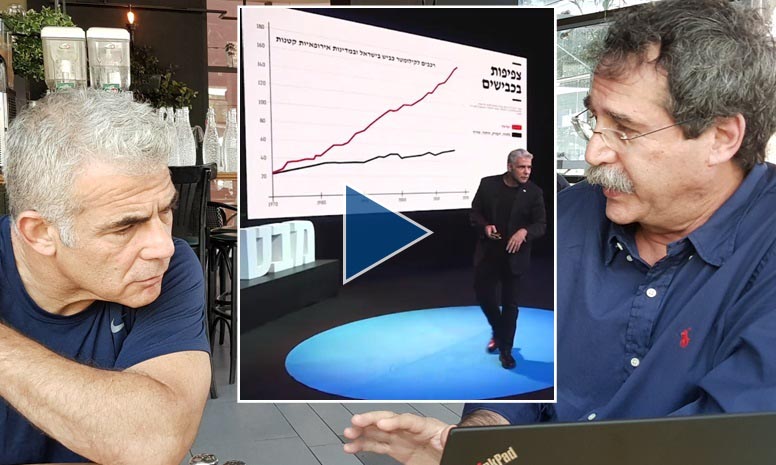 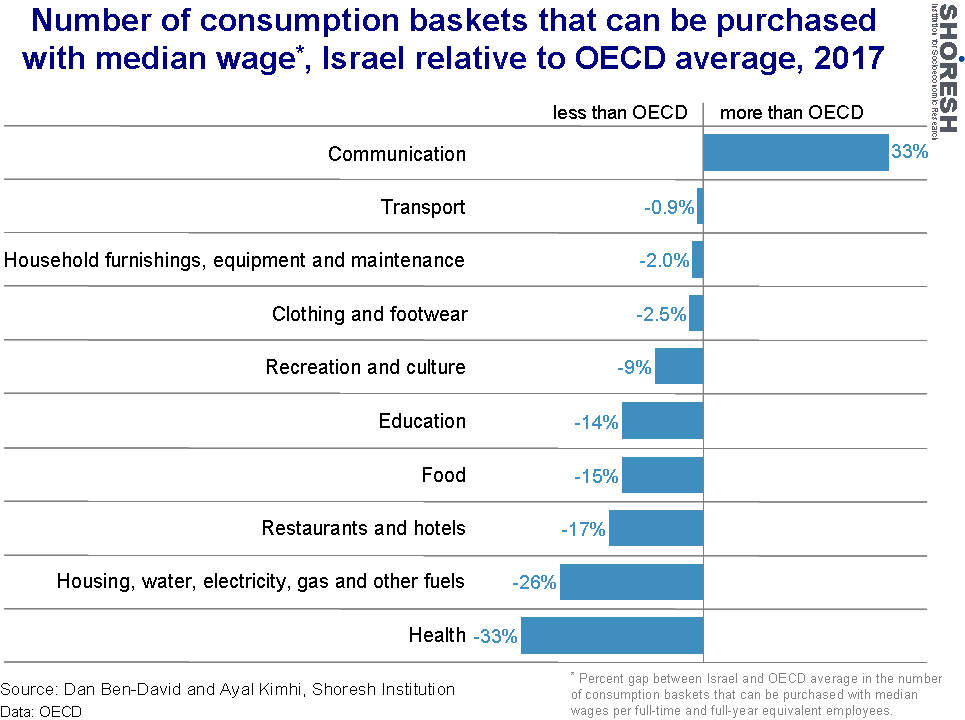 One topic that continues to stay at the forefront of the public discourse in Israel is the issue of high prices. What gets submerged in this discourse is (1) to whom and (2) to what is the price of a given good compared. Three approaches are outlined here. The OECD method compares the price of a good in an individual country to its average price in the OECD countries – but it is based on exchange rates, which distort the picture of relative prices among countries and bias the OECD comparisons. Given the difficulty in accurately determining actual price gaps between individual countries and averages of country groupings, such as the OECD, two alternative measures are detailed here. The first calculates the gap between the price of a specific consumption category and the overall price level in each country and then compares this gap to the average gap in the OECD to ascertain if the price is extraordinarily high or low vis-à-vis other domestic prices in comparison with the OECD average. The second alternative relates prices to wages and compares the number of goods that can be bought with the median wage in each country to the OECD average. Though none of these methods is free of drawbacks, they all nonetheless point to a number of consumption categories where Israeli prices appear to be exceptionally high and policy attention is needed. 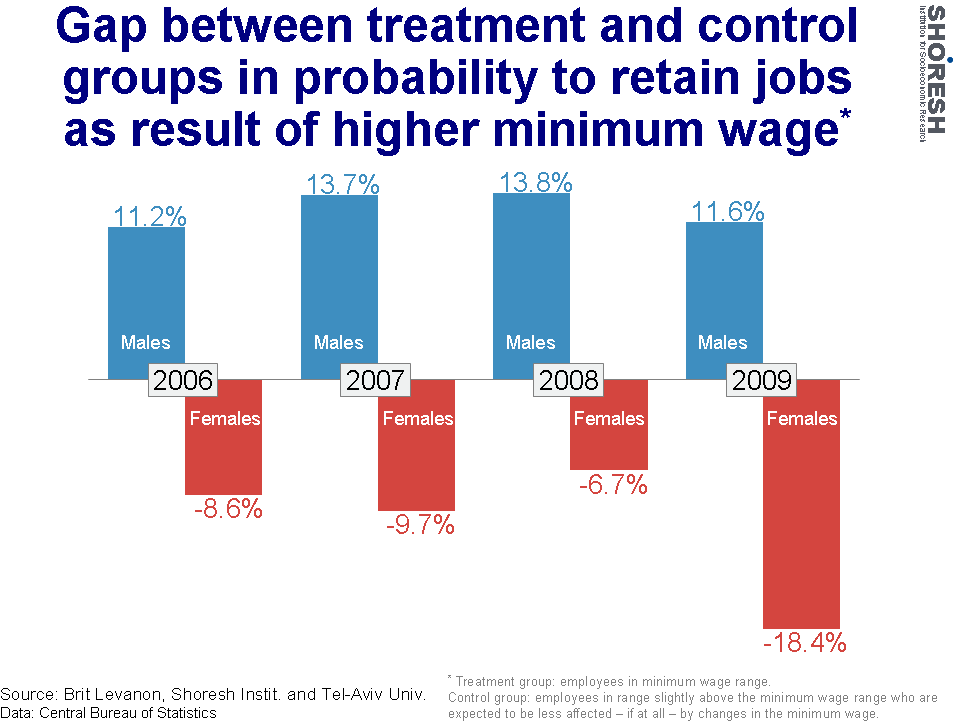 Minimum wage’s impact on employees: An example from Israel

A heightened sensitivity to workers’ welfare has led countries to implement a variety of policy tools providing support for workers at the lowest income levels. Two of the most common tools – both of which are used in Israel – are the minimum wage and the negative income tax (referred to as the Earned Income Tax Credit in the United States). This study examines the impact of a gradual increase in Israel’s minimum wage during the period 2006-2009 on the wages and employment of workers at the lower wage levels. The findings indicate that the minimum wage increase led to higher wages, but that its effect on employment was not uniform. For men at the lower wage levels, minimum wage hikes caused a decline in movement into and out of employment – meaning that fewer workers stopped working, while fewer men became employed. For women, by contrast, there was a higher probability for termination of employment, with no change in the likelihood of joining the labor force. In summation, minimum wage increases benefitted men more than women at the lower wage levels, thereby widening the labor market gender gap. As such, there is a need for supplemental policies that provide differential support to women working at the lowest wage levels. 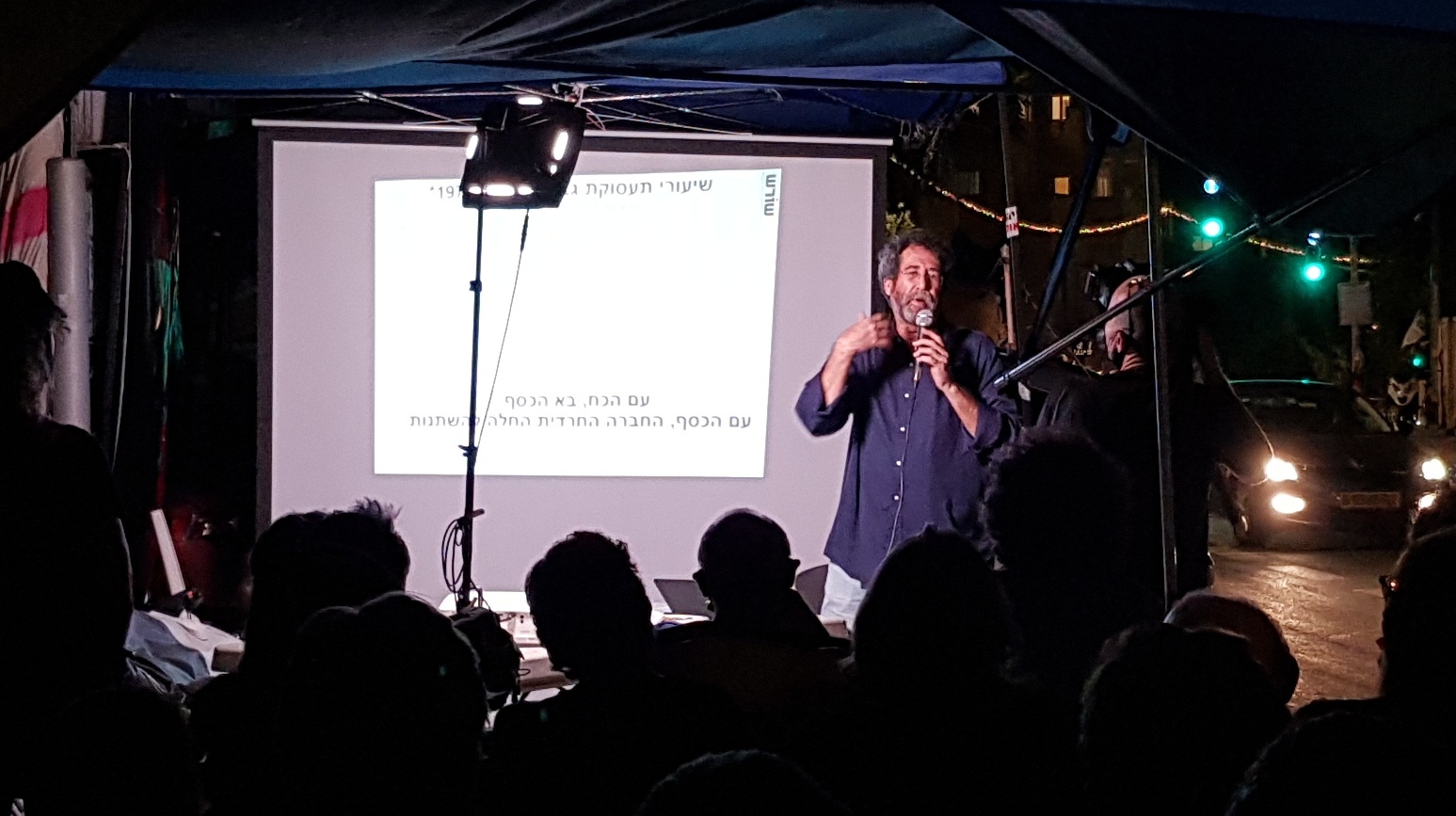 Israel’s political establishment has been leading the country straight towards the iceberg for decades. The economic fallout from the Covid-19 pandemic and the ongoing neglect of the healthcare system are just the tip of the iceberg. Decaying education and transportation infrastructures, for example, choke the labor productivity – GDP per hour worked, already among the lowest in the industrial world – that determines Israeli wages. In fact, productivity gaps between the leading developed countries and Israel have risen more than three-fold since the 1970s. When roughly half of the country’s children, who tend to belong to Israel’s fastest growing population segments, receive a third world education, then the nation’s ability to maintain a first world economy – which is a necessary condition for physically surviving in the planet’s most dangerous region – begins to seriously threaten Israel’s future existence.Given on the Jerusalem street across from the prime minister’s residence at the invitation of protest organizers, the talk was made with a clear understanding that the presentation would be a professional and evidence-based analysis of the kind that Shoresh provides senior government ministers and opposition leaders alike. Its focus was on the internal changes that Israel has undergone, their magnitude, their impact, and on the need for significant changes in the country’s national priorities while the window of opportunity is still open. 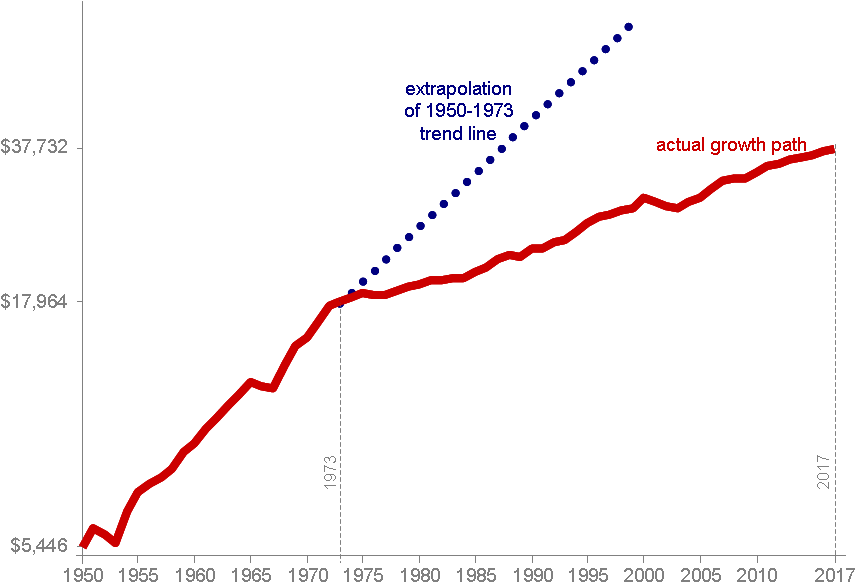 Venture capital investments as percent of GDP, average for 2014-2018 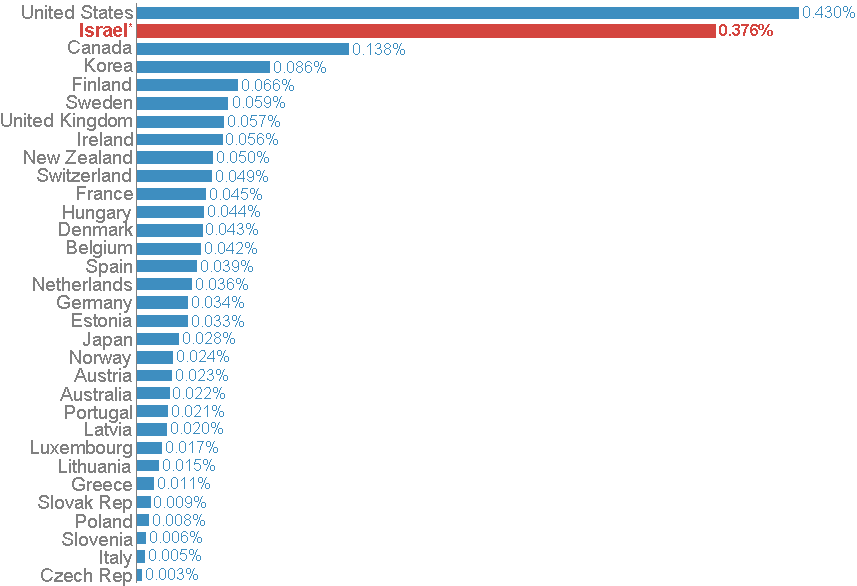 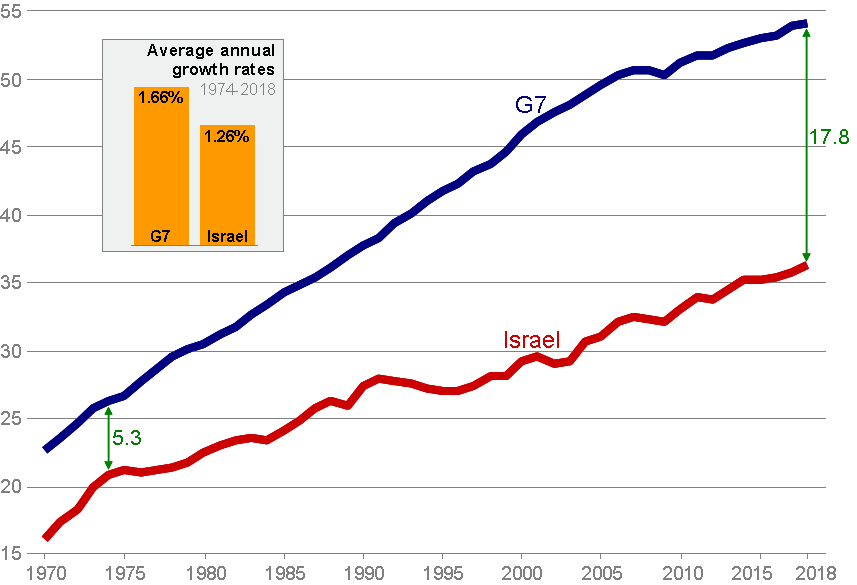 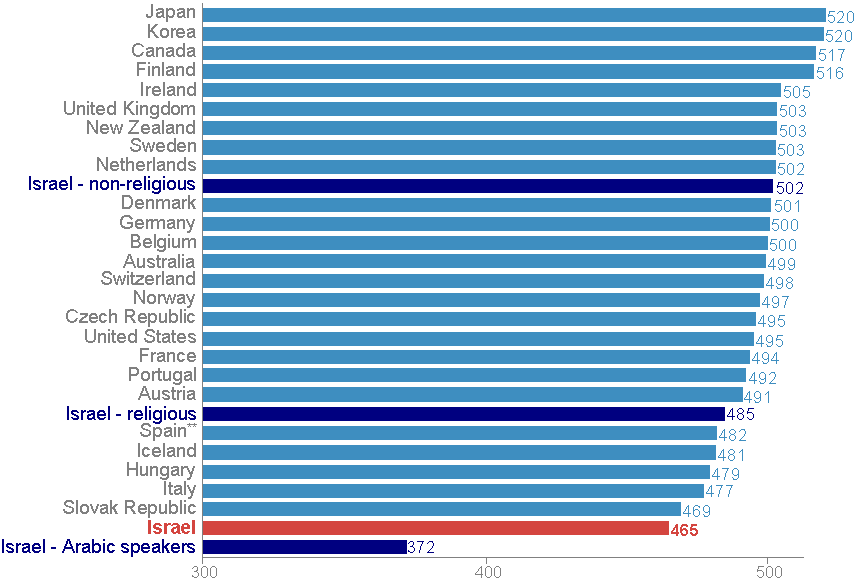 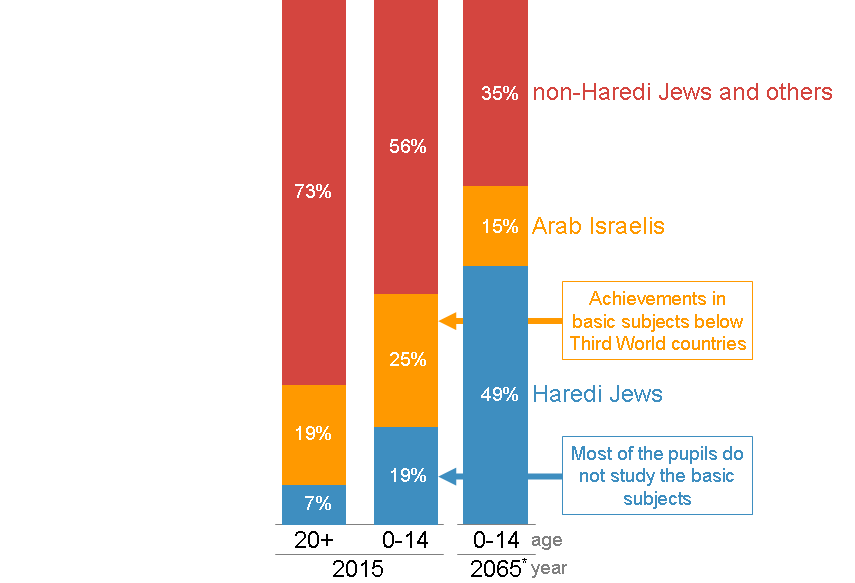 Israel’s academic ranking in the world according to academic citations by article, by selected fields, 2003-2013 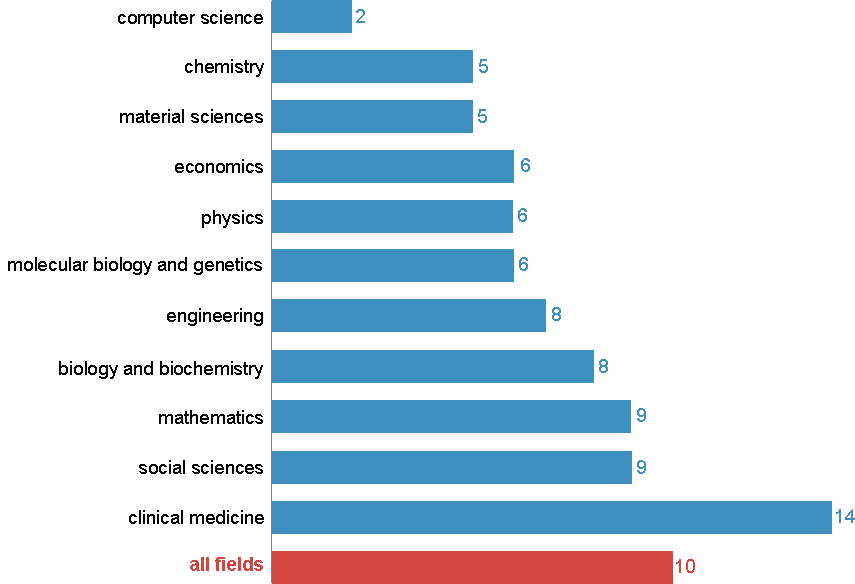 For more on Israel’s internal root (shoresh) existential challenges, read our publications, watch our videos – and help spread the word. 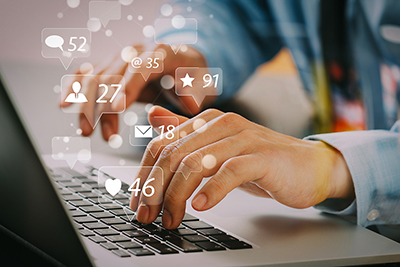 Help bring Shoresh findings
to others who care about
Israel and its future. Write us:
friends@shoresh.institute